In honor of Screen-Free Week 2013, I thought I’d share one of our family’s most shocking secrets: 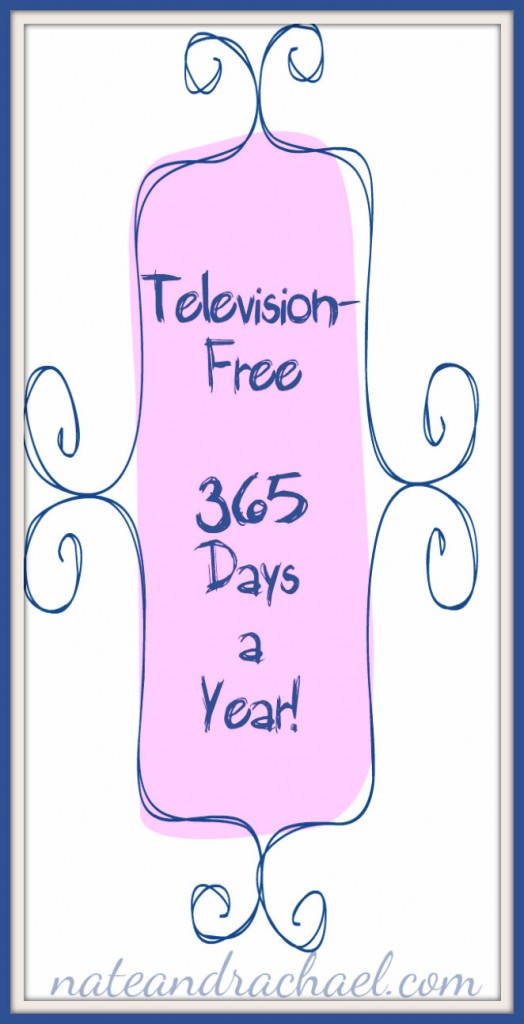 Now before you label me as a total weirdo (if you haven’t done that already!), let me assure you that we get plenty of screen time. Nate is an IT guy, after all! At last count, we had eight (mostly) working computers in our house. And one of those is hooked up to a projector that allows us to stream our favorite shows.

So why don’t we have an actual television?

What’s that? You thought I meant “convenience”? Nope. It’s a pain to get to our favorite shows. (Turn on the computer, turn on the projector, wait for them to get ready, search online for what we want to watch, wait for it to buffer, hope the connection is strong.)

Which means the TV is never on as background noise.

Which means my toddler doesn’t get engrossed in a cartoon long enough for me to braid her hair.

Which means I don’t plop the girls down in front of a show when we’re having a rough morning.

Which means I can’t pass the remote off to my toddler while I get dinner ready.

Which mean that our 2 1/2-year-old daughter isn’t interested in TV, because she’s never watched a single show or movie.

And that, folks, is where we start to sound like a houseful of counter-cultural crazies.

Because, seriously, how many kids do you know who are that close to being screen-free?

Don’t worry, I’m not going to make you feel guilty about your decision to let your kids watch TV. If majority rules, I’m the clear loser. Besides, I don’t think TV and movies are bad. We ended up here because I’m a rule follower. And when I read that the AAP said no screen time for kids under two, I took it to heart! 2 1/2 years later, our toddler’s life has no place for TV. One of these days, she’ll watch Elmo on Netflix or the short 15-minute Shirley Temple movies my parents got her for Christmas, but not yet. Our routine works without it.

So if we don’t have the TV on ever, what do we do instead?

Here’s a peek at our routine:

If she watched TV, I’d probably let my daughter watch something first thing in the morning while I’m waking up (I’m the late riser!) and feeding the baby. But my toddler is content to play by herself in her bed. I love this time of the morning. It’s the only time she’s awake and alone, and she talks to herself the entire time.

And when she’s ready to get up, I’ll hear something like this: “Raaaaachael! Naaate! Where are you? Whereareyouwhereareyou? My awake now!”

If I can’t sleep in until noon, at least I have the cutest little wake up call.

After we’re all awake, dressed, fed, and tired of exploring things around the house, we leave.

Our town is small and we walk a lot of places; otherwise, I might spend as much money in gas as you do on cable. I like to get out of the house around 10:30. That’s around the time when we all start to fuss. Each day we have a different destination: grocery store, science time or open gym, play date, museum, library or daddy date. That’s our usual five-day routine. If we have nothing planned or it’s an unusual day, we’ll take a walk, meet up with neighbors, or just hang out in the playroom.

After lunch, we read books and get ready for naps. I get the majority of MY screen time while they nap. It’s when I blog, edit pictures, and catch up on things going on in the outside world via facebook, pinterest, and sometimes a legitimate news site. 🙂

If the girls wake up early, I struggle with my “me time” being cut short. And that’s probably when the baby gets the most secondhand exposure to screens. I’ll try to finish up while she’s playing.

After Nate gets home, we walk. Have you met our dog? She’s full of energy and requires two long walks every day. So we bundle up and walk in the cold and snowy winter, rainy spring, humid summers, and windy fall.

Where in that schedule is there a time or place for TV? Like I said, we’re not against TV, we just have built our routine around other things.

If I haven’t totally isolated or offended you, hang around! Next time I’ll share our strategic use of technology with our daughter and how Nate and I get our fix of Lost, Downton Abbey, and Revolution!

While you’re here, check out some of these other blogs and bloggers with screen-free ideas!