A few weeks ago, Nate turned thirty. Some of you now think we’re old and uncool. Others may be annoyed by the fact that we’re still so young. Or perhaps you think it doesn’t matter because all couples with young kids are in the same phase of life; therefore, we’re all the same age.

Regardless, thirty is a great excuse to throw a party. Nate and I love to be random and goofy and our friends are game for just about anything, so a murder mystery party seemed fitting.

Want to throw your own dramatic, silly, and hilarious murder mystery party for you and approximately 7-100 of your closest friends? Read on. 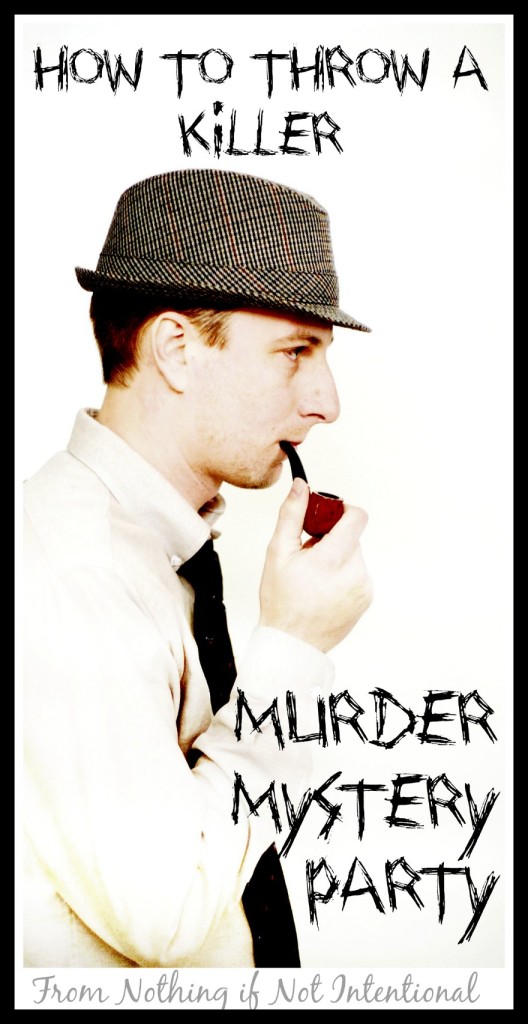 Affiliate links included for your convenience.

1) For starters, you need to solidify your guest list. I know what you’re thinking: a solid guest list? This isn’t a wedding! No, of course not. (But a RSVP card isn’t a bad idea.) Murder mystery parties are made for a certain number of characters and guests. You’ll need a pretty good idea of who can and can’t come before you choose your party and buy your script. Which leads nicely to my next point…

2) Once you have your guest list, you need a murder mystery script. Okay, so “script” sounds intimidating. “Script” implies lines to memorize and scenes to rehearse. Don’t worry–there’s no need for any sort of rehearsal for a murder mystery party at your house! These scripts are loose guidelines for how the characters should interact and how the party should flow.

Our script was created by MyMysteryParty.com. There are options on the site for all sorts of party themes (e.g. different eras, holidays, or situations–like “Murder at the Poolside”) and party sizes. I’m not joking–you could have 100 party guests! 8-20 seems to be a more common party size.

You can order from the site, download to your personal computer, and print from home. Yes, there’s printing involved. We printed about 75 pages for our party for 23 people.

get great reviews, but most (all?) appear to be for exactly eight people. 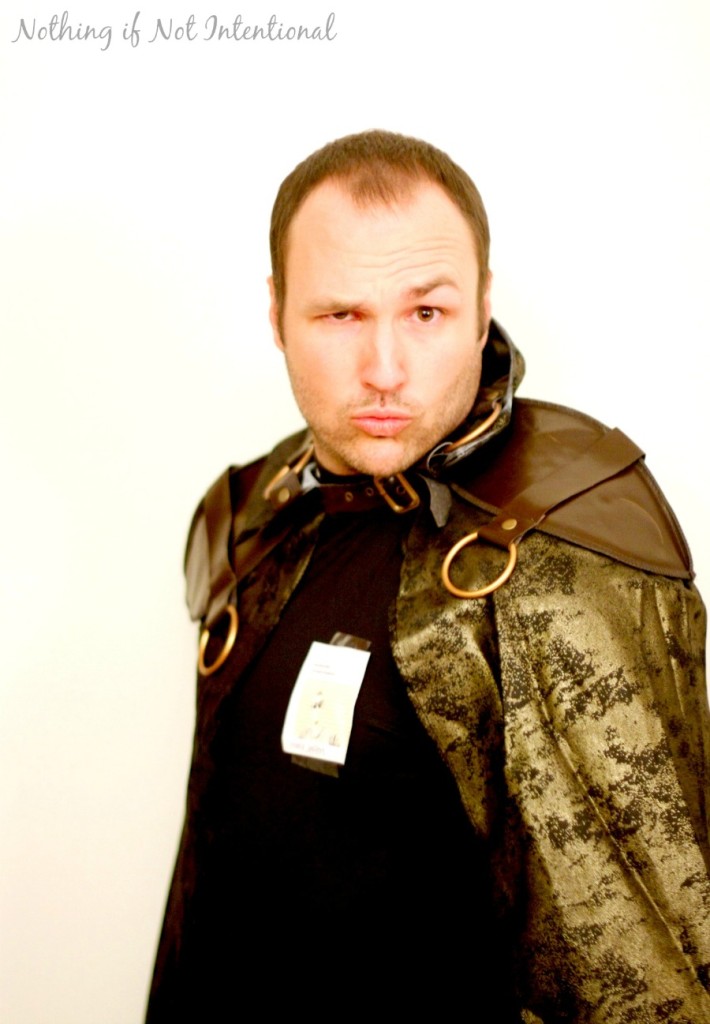 3) Once you have your guest list and script, assign your friends and party guests their appropriate (or inappropriate) roles. This is where it pays to have fun-loving, goofy friends like we do. I mean, really? Do we have crazy/awesome/hilarious friends or what? 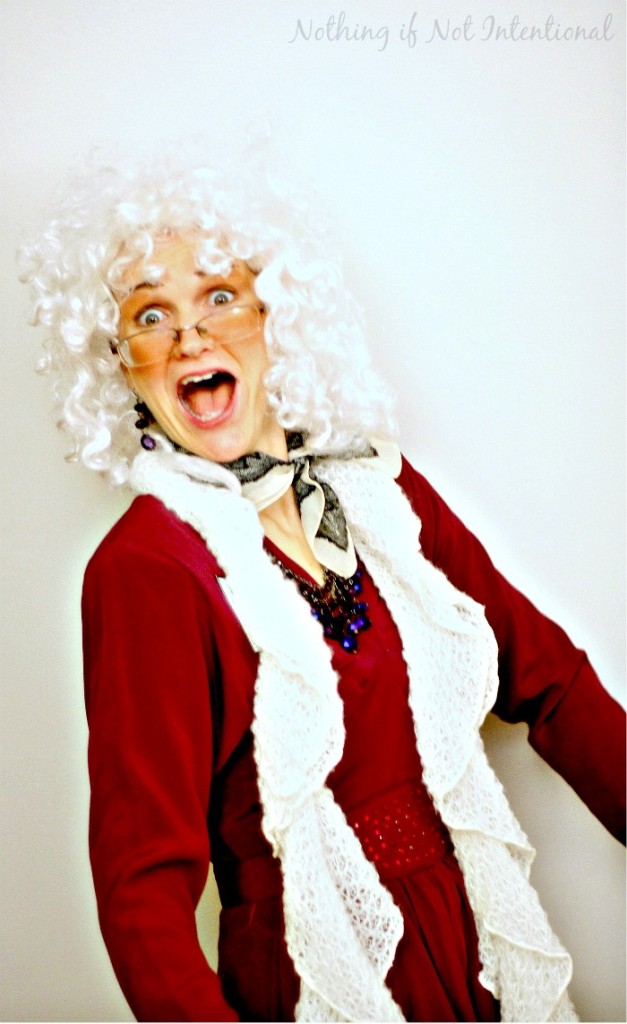 Most scripts have required and optional characters. You’ll want to assign the guests who are most likely to come to the required roles. Also, as the host, try to be considerate of your friends’ personalities. If someone is very timid, they might not be comfortable playing the role of a character who is described as “boisterous, over-the-top, and annoyingly loud.”

4) Send each guest his or her character’s name, costume description, and basic info about the part he or she is to play.

For instance, one of the characters at our party was “Earline Crenshaw” (pictured above). Here’s the info I sent her before the party:

Earline Crenshaw, a recent widow, is the hard working owner of Shady Oaks Mart. A compulsive liar even when the truth is better, this business owner is a known cheater during board games so beware if you ever play a game against this master of deceit!

5) At this point, your guests will probably be wondering what to expect. Most murder mystery scripts come with guest instructions (e.g. stay in character, mingle with other party guests, follow the instructions on your clue cards, don’t lie, etc). I forwarded this information to our friends prior to the party.

A few people will want help with costume ideas. If you have a group email or shared facebook message, other party guests can help come up with ideas. Get more inspiration from pinterest, and then check Amazon, Goodwill, and your child’s stash of abandoned Halloween costumes for costumes and accessories. 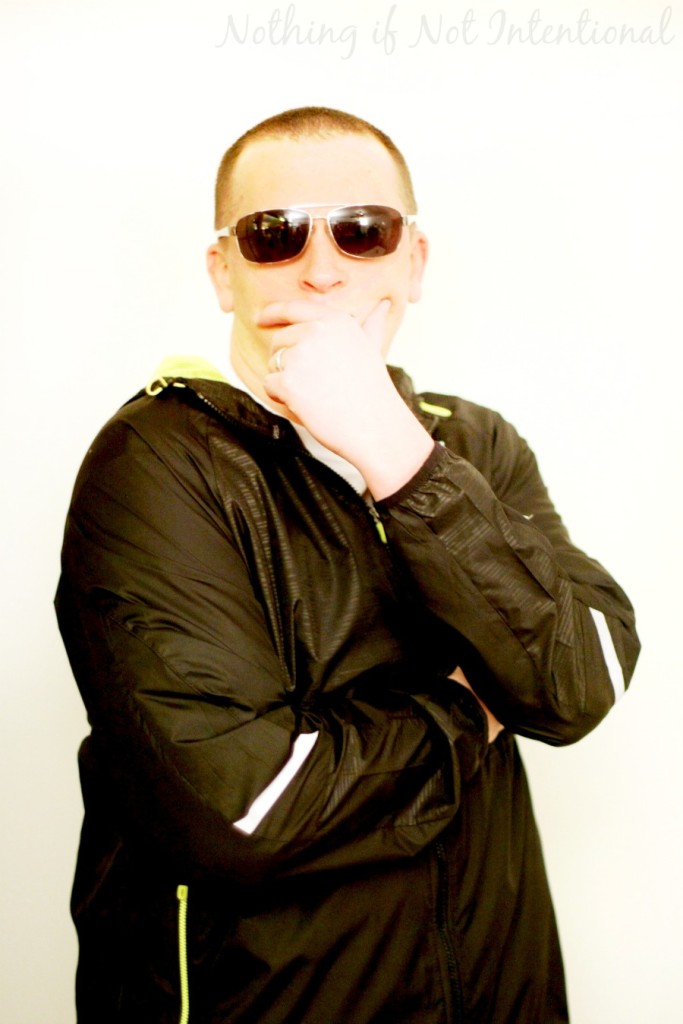 6) As the host or hostess, you’ll need to print clue cards for each of the guests so they know which tidbits of personal information they know to conceal and reveal. You’ll pass these out during the party.

7) Before the party, there may be a few props for the host/hostess to plant (like potential murder weapons). Be sure to read the host instructions and set the scene before your guests arrive. 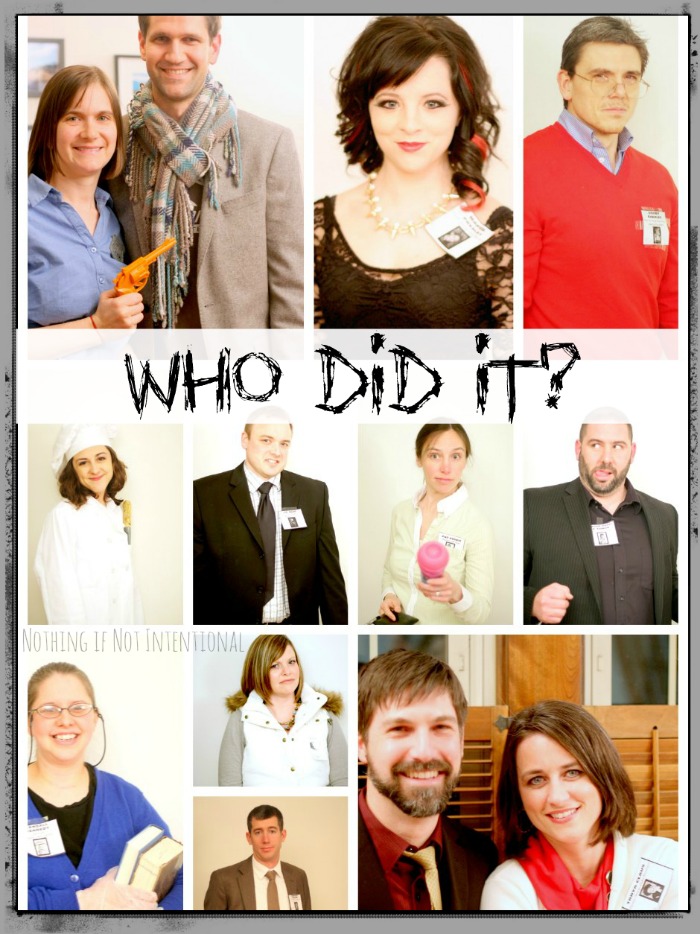 Party scripts often follow the following three round format. This was true of our murder mystery kit from MyMysteryParty:

8) Round one corresponds well with appetizers and drinks. You will give each character a clue card and encourage them to mingle and chat with the other guests. On each person’s card, there is information to reveal (e.g. I love bacon and softball!) and conceal (e.g. I was in jail for murder). This casual chatting and mingling is what helps the plot to unfold.

9) Round two corresponds well with a dinner or meal. Guests are given new character cards with new info to reveal and conceal. Tension and conflict builds between the guests until…someone is murdered! Yes, a shocking, awful, horrible crime will take place at your party, and your guests will be expected to solve it and identify the murderer.

10) After the victim has been killed off, guests will have information to share regarding their own alibis and eye-witness info that could incriminate another character. Guests should be given investigation sheets where they can write down the name of the character they suspect and his or her motive. (Note: at this point, the person playing the murderer may not realize he or she is guilty!)

11) The final round goes well with dessert and hot drinks. After accusations have been made, pass out the final character clue cards and encourage each guest to read what is written on his or her card. If you’re lucky, the murderer may confess!

The host and/or hostess sets tone of the party from the moment the guests walk in the door. Nate was the creepy convenience store clerk who was also doubling as my fill-in butler. (That’s us in the picture below!) The butler detail wasn’t in the script, but we needed a way to tie him to the hosting role. So when our friends came to the door, Nate answered it in a creepy and awkward way. Instead of hanging up coats, he threw them on the floor. Instead of putting purses and bags in the other room, he started digging through them. This encouraged our guests to be “in character” from the start.

Our party (with 23 people) took about 3 1/2 hours–not counting the chatting we did (as ourselves) after the mystery ended.

If you’d like, you could award prizes to the person who solves the crime, the best character, and/or the best costume.

Our party was a little large, in my opinion. 10-15 people would have allowed for more thorough secret swapping and clue revealing.

The host needs to set a good example and stay in character. If the host and hostess aren’t acting as their characters throughout the night, why should anyone else? Your guests will follow your lead! The more into the acting you get, the more likely the other party guests will get into it too.

All in all, our party was a fun night of joking, laughing, and acting with our friends! 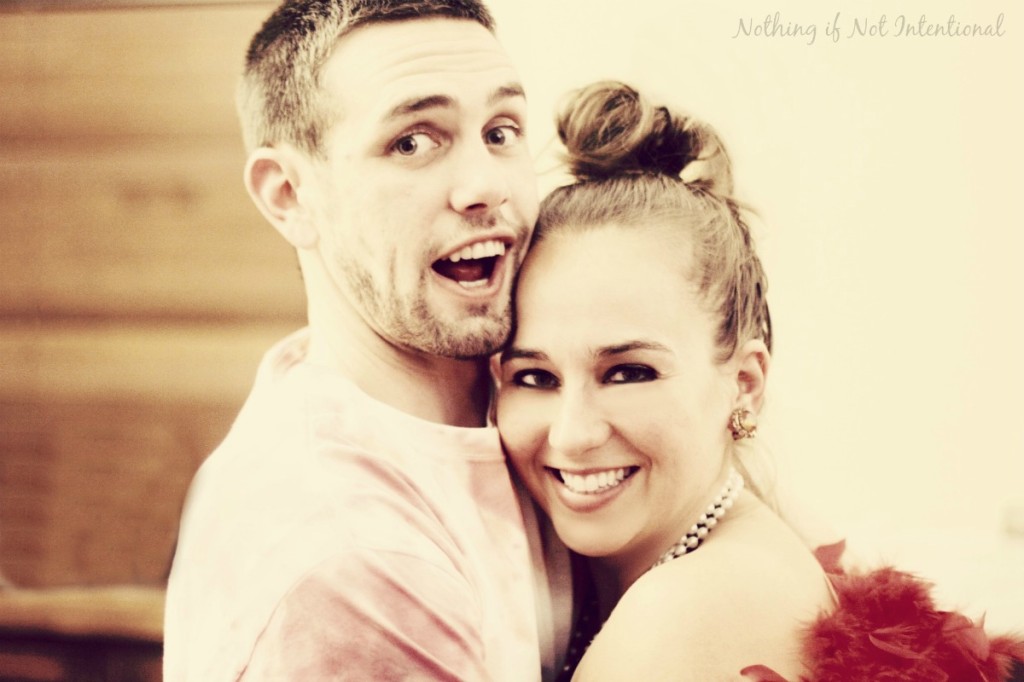 A murder mystery party is one of the many ideas we share in our most-popular post: 35 NEW Date Night Ideas. If you ever get tired of the same old dinner date routine, check out our list for more fun ideas.

Thanks for visiting! We’d love for you to hang around! Why not chat with us on facebook, subscribe by email, or pin with us on pinterest to be sure you don’t miss an update?