This blog post centers on a bit of controversy in our home. For the record, I grew up believing in Santa; Nate did not. Neither of us is certain one way is better than the other.

Now that I’m a mom, this time of year always causes me to question whether we want our kids to believe in Santa Claus.

For some, the dilemma is completely ridiculous. Of course kids should believe in Santa! Don’t deprive them of that innocent joy and magic! Let them be little! (This was my reaction when I first heard that some kids never believed in Santa Claus.) 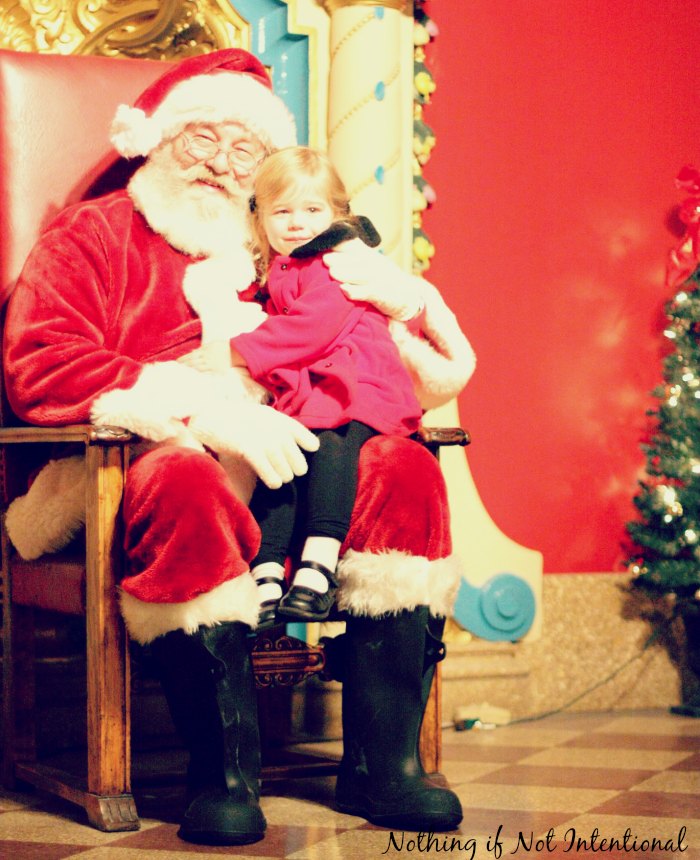 Or perhaps it’s clear in the other direction: if you lie to kids about Santa, they’ll learn they can’t trust you!

But for me, it’s not that simple. This could be the year our daughter really gets into Santa. We could tell her she won’t get any toys if she doesn’t listen to Mommy and Daddy, and she would believe us.

We could take her to the mall and persuade her that the jolly man in the red suit will be coming down her chimney on Christmas Eve, and she would get excited.

We could help her listen for reindeer on the rooftop and tell her that Santa ate the plate of cookies, and she would be convinced.

I want to make a great decision now (while our kids are itty-bitty), because it’s hard to backtrack later in this situation.

And, as of now, I don’t think we’ll encourage our kids to believe in Santa. Here’s why: 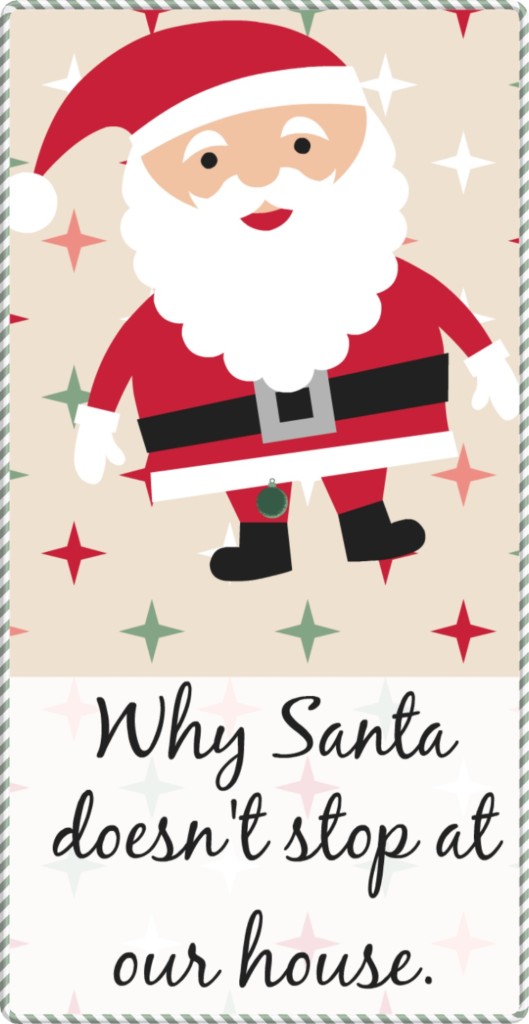 1) I’m not comfortable with the deception.

And I’ve yet to meet someone who doesn’t believe in Jesus because their parents told them that both Santa and Jesus were real; therefore, since Santa isn’t real, Jesus must not be either. (UPDATE: I had a reader comment to say that this was true for them!)

But I don’t want to lie to my kids. I want to always be honest with them in age-appropriate ways.

2) Similarly, I want my kids to be truth tellers.

It’s not hard to teach kids to lie. I won’t tell you it comes naturally, because I don’t want to start (a different) fight. But our girls have already learning how to hide things. At age three, our oldest daughter was running to the closet to eat stolen candy. She hid toys she didn’t want to give back. It took her a little too long to confess that she did, indeed, “whack her sister in the face.” Some of these things are playful and silly, but we’ve been talking a lot lately about how important it is to tell the truth, to be honest, to not hide things from mommy and daddy.

You see where I’m going with this, right? If we’ve been encouraging our girls to be truth tellers, how can I, in good conscience, turn around and encourage an untrue story about a man who brings presents to good little boys and girls? How honest do I have to be in order to raise kids with integrity?

3.) I don’t want the holiday to be all about the crazy amounts of stuff they’ll find under the tree.

Kids love Santa because Santa brings them gifts. Right? That’s at least part of the reason we’re crazy about that chubby old man.

Do I sound like a hypocrite if I say that we will definitely have Christmas gifts at our house? It’s a great time for us to buy some of the random big things we, the parents, have had our eyes on all year–a balance bike, an easel, maybe even a rolling luggage set that’s ridiculously cute. But I don’t want our kids to be obsessed with the stuff. And, to prevent that, I think we need to be extreme in our approach to Christmas. Our kids won’t be writing to Santa with ridiculous, out-of-the-question wish lists. If they have specific requests, they can direct them to Mom, Dad, or the grandparents.

(That’s also why we’ll be boycotting television with commercials most of the year–hello, Netflix!–but tv is another topic entirely.)

I don’t want Santa’s magic and unlimited resources to encourage greed and selfishness.

4.) Santa shouldn’t be the star of Christmas.

I don’t want to be cheesy on this blog or with my kids. But somehow, someway, I want to make sure we have our priorities straight at Christmastime. If parents don’t teach otherwise, our kids are going to learn from mainstream society that Christmas is about lights, lawn decorations, the Christmas tree, cookies, Santa, reindeer, Christmas carols, family, and gifts. Those aren’t necessarily bad things. But I want to make sure that we’re not trading things that are good  for that which is best. I recently read a blog post that was strongly against Santa.  While I’m not sure I agree with everything written in this particular post, this quote stuck with me:

“For a five-year-old, how can Jesus compete with Santa? Our children don’t have spiritual perspective; when faced with the choice of allegiance, they have a baby in a manger, or they can get a jolly, twinkling, flying character who will bring them presents. This is going to be an easy choice for them. My friend Andrew, who identifies himself as a member of the “non-believer corner” put it this way:

I always thought it was strange how Christians will tell me they have this giant and awesome truth they know is true deep in their soul and want to share with me, but when 12/25 comes around they lie to their own progeny because, apparently, that giant, liberating, and awesomely simple truth is somehow just not enough. It may be a good narrative, but it needs a little something to give it some panache.”

Shouldn’t the “awesomely simple truth” of Jesus to be enough for my family? Isn’t that the “best” thing about Christmas?

So what will we do?

Here’s a rough idea of the alternative we’re working on: we’re going to encourage our kids to have fun pretending there is a Santa Claus. We’re going to tell them that Santa isn’t real, but they can pretend he is. We can go to bed early on Christmas Eve, because we’re pretending he’s going to come down our Chimney. We can go see him at the mall and read books about the elves in the North Pole (just like we read other fiction books). They can use their imaginations and dream up stories about Mrs. Claus or the other less-famous reindeer. We’ll encourage that fantastical fun.

But we won’t tell them Santa is real. They’ll know he’s pretend….at least as much as any young kid “knows” the difference between reality and fiction.

And I hope they love it! Because pretending is fun. Even our two-year-old loves pretend play! She is thrilled to pretend to bake cookies and pancakes, and we often catch her having pretend phone calls with her grandparents or her baby friends. Together our girls spend hours and hours each and every day playing baby and mommy. Their imaginations are rich and their creativity is strong.

I want Santa Claus to be really fun in a pretend way–like Mickey Mouse and the characters we read about in stories.

By the way, I asked my four-year-old today if Mickey Mouse was real and she said, “Yeah, sometimes. Like when we saw Mickey at Disney World. But mostly he’s pretend.” She did meet some a version of Mickey Mouse at Disney. She understands the concept of dress up and costumes. So, in a sense, what she said is very true.

Here’s another quote I pulled from a relevant article about the wonderful possibilities that go along with pretending:

“When parents tell their children about Santa Claus they encourage belief, not imagination. The features children suppose to characterize Santa Claus are not imagined to be true of him, they are believed to be. Children do go on to fill in further characteristics of Santa Claus not contained in the original story, but this is no more an exercise of their imagination than their efforts at filling in characteristics of China that are unknown to them. Evidently, insofar as increased imagination is supposed to be what is gained through the Santa Claus experience, this can be much more effectively pursued by having the child pretend that Santa is real, rather than believe he is.”

The Santa experience could be about imagination and pretend instead of belief.

This year, we’re focusing on the St. Nick story (this book is our favorite). And our Christmas Bucket List has some ideas that direct our attention to things other than ourselves (and our wish lists).

We still have our doubts about how we want to deal with Santa in our home, but at least we’re having the conversation. 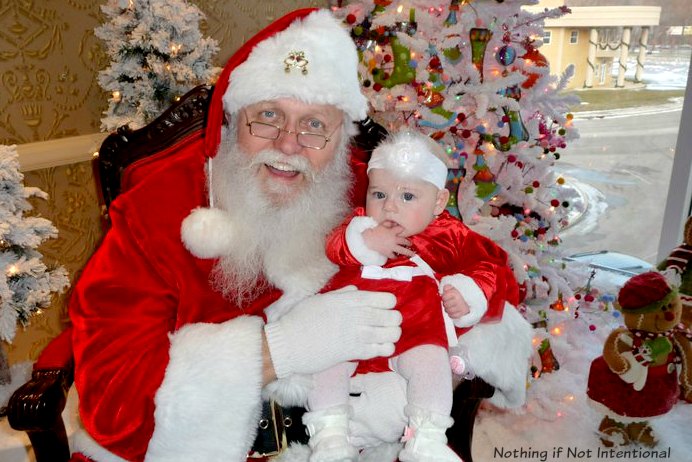 16 thoughts on “To Believe or Not to Believe in Santa Claus?”