On Friday, January 3, 2014, my family (my parents, husband, two young daughters–ages 1 and 3) and I were playing on Isla Verde beach in Puerto Rico when a man came out of the shadows, held a knife to my mom’s throat, and fought to keep her restrained while his accomplice took our belongings. I’ve written out my version of the attack, and you can read it here. Below you will find the travel safety lessons we learned the hard way. 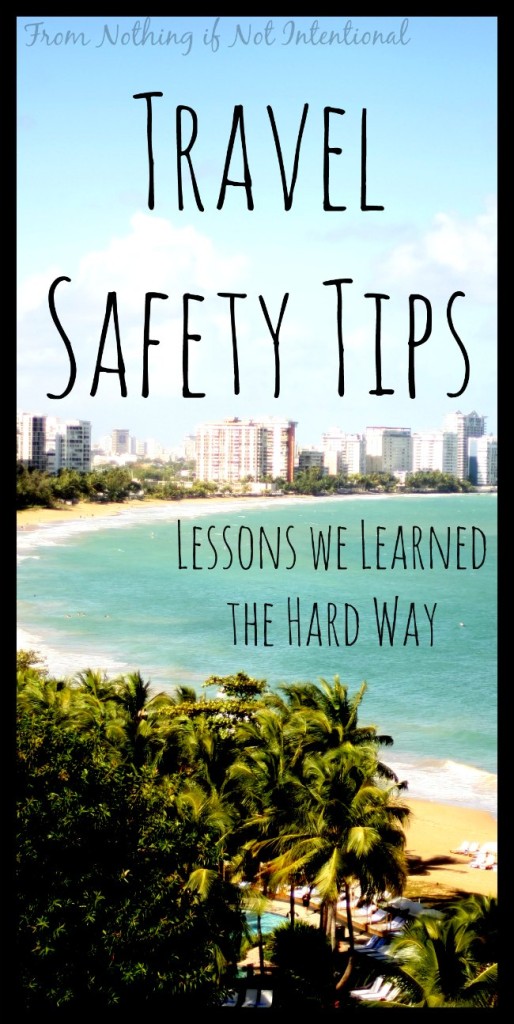 I’m a travel optimist. When I think about past travels, I usually only remember the good things. But this past week has caused me to reflect, and I realize now that we’re no strangers to travel hiccups.

Some of our experiences have been our own fault–like when Nate went down a water slide in Mexico with our passports in his pocket.

Some have been uncomfortable and exhausting–like the multiple times we’ve picked up stomach parasites in Guatemala.

Some have been scary–like the time we were almost crushed by boulders when we were sliding down an active volcano.

And some have been costly–like when Nate lost his wedding ring in a game of beach volleyball and we had thousands of dollars (all later recovered) taken electronically from our bank account in Venezuela.

But never have we been targeted.  Never have we experienced a violent crime. Never has anyone tried to hurt us.

I HATE that we learned the hard way. But I’m also thanking God that we’re all alive and whole. It’s my hope that the travel safety lessons we learned will help someone else stay safe and travel smart.

If you must wear jewelry, make sure it’s fake–On our first anniversary, we went to Venezuela. With all the travel warnings and alerts, we decided to be smart and leave my beautiful wedding ring at home. To replace it (because what newlywed wants to be without a ring?), we went to a pawn shop and asked for their cheapest fake diamond ring. For $2, I got a beautiful solitaire that didn’t even turn my fingers green. Ironically, Nate lost HIS ring (which was not fake) on that trip when it flew off in a game of beach volleyball.

During the mugging, I was wearing my real ring (because it’s Puerto Rico! We won’t run into problems in Puerto Rico!). Of course the attackers could have had it if they wanted it, but I got away with the girls before they asked. In fact, my ring didn’t even cross my mind until hours later.

Know the crime reputation for the areas you are visiting. I’m hesitant to tell you to Google trip info. For every person who tells you it’s perfectly safe to wander around alone, another might tell you about the muggings, murders, and purse snatchings they’ve witnessed from their condo balconies. For international trips, the U.S. government posts travel alerts and warnings. I’ve found those to err on the side of caution.

Would a little research have helped us? Well, even now that we’ve been robbed on the beach of Isla Verde, I still have to be pretty specific in my searches in order to find warnings to stay away from Puerto Rican beaches after dark. One about.com safety tip article says to avoid beaches after dark but “If you must take a moonlight dip, stick to the populated, hotel-heavy strip around Condado and Isla Verde.” Guess where we were attacked? In the populated, hotel-heavy strip of Isla Verde beach.

The other info I’ve found has mentioned that a lot of the crime in Puerto Rico is related to drugs. Tourists aren’t usually targeted or attacked. However, Nate’s found a few articles that say that wealthy people are reluctant to relocate to PR in spite of the tax shelters because it’s unsafe.

I think a little pre-trip googling would have made me more cautious. We were overconfident and even cocky. Learn from our mistake and don’t be overconfident.

Be extra-careful after dark. This was our biggest error. Don’t go to beaches or dark areas at night. That was our stupid, stupid, stupid mistake.

Separate your money. It’s a good idea to keep your cash in a money clip in a pocket separate from your wallet. That way you can offer the attacker cash but hopefully keep your identification and credit cards. You could also wear a travel wallet around your neck (like this one) or waist (like this one), and divide your money into different pockets, zippers, and bags.

If there’s a hotel safe, use it. Nate left our passports and a good portion of our cash in our hotel safe. This kept us from losing all of our cash.

Have something to offer. I’m not sure if self-defense experts would agree with me, but we were glad that we had cash. The men attacking us wanted money, and they were willing to hurt us to get it. (Read the full story to see how my mom fought back HARD, yet the man didn’t relent until he had her wallet.) What if we hadn’t had cash? Would they have walked away empty handed?

One solution might be to have a decoy wallet. You know how spies always seem to have burner phones that can be easily disposed of or thrown away? Do that with your wallet. This tip is from Adam at Visit Flyover Country, and I think it’s genius. He says he travels with a wallet that has a little cash, expired credit cards, old hotel keys, and an outdated driver’s license. Robbers can have this wallet and think they’re getting away with all you have. In our situation, this totally would have worked. It was dark, and the men weren’t about to hang around verifying expiration dates.

In the age of identity theft, now could be the time to get a fake i.d. with false info so that none of your personal information (current or expired) ends up in the hands of thieves. Of course if you don’t have a fake i.d., I still think it’s preferable to have old cards stolen than current, active cards.

Air horns, mace, pepper spray, tazers are of limited use. Had I carried a “weapon,” I couldn’t have used it. I had two girls in my arms. And would the guys in our group have used one with a knife to my mom’s throat? No way.

Which brings me to my next point: some precautions are only good for non-violent attacks. I have this awesome purse that’s been reinforced with metal. It has extra carabiners and locks to protect it from pick pockets and purse snatchers. I bought the purse for those extra features, but they’re only good if someone comes by and tries to snatch my belongings without a threat of violence.

Perhaps a self-defense class would have been of more use. However, I think the general consensus is that when a man holds a knife to your neck, you need to be compliant. (My mom didn’t realize he had a knife; she thought he was “just” choking/asphyxiating her. This explains why she punched, kicked, and bit him hard enough to draw blood.) This article gives some defensive techniques, but my mom wasn’t in a position of strength to use most of them. However, a self-defense class would give confidence and knowledge.

Stay alert. Post attack, my senses are in overdrive. I see every shadow, notice every person that could catch up to us with a few steps, feel nervous about the groups loitering near us. This makes me aware of how very unaware we were at the beach. Our guard was down, and I noticed no one. We were in our own happy, oblivious world–snapping pictures of the girls, laughing, playing in the sand.

Yet when the men approached us the first time, I was a little suspicious. And then I shook it off as Nate good-naturedly answered their questions. The takeaway? Trust your instincts.

Travel as a group. Thank God there were so many people together (4 adults), and they didn’t attack when my parents were alone with the girls.

Even with these precautions, you could be targeted. I’ve asked a few knowledgeable friends for advice on what we SHOULD have done when we were attacked. You can read it HERE: “What to do if you’re attacked. Information I hope you NEVER need to know.” 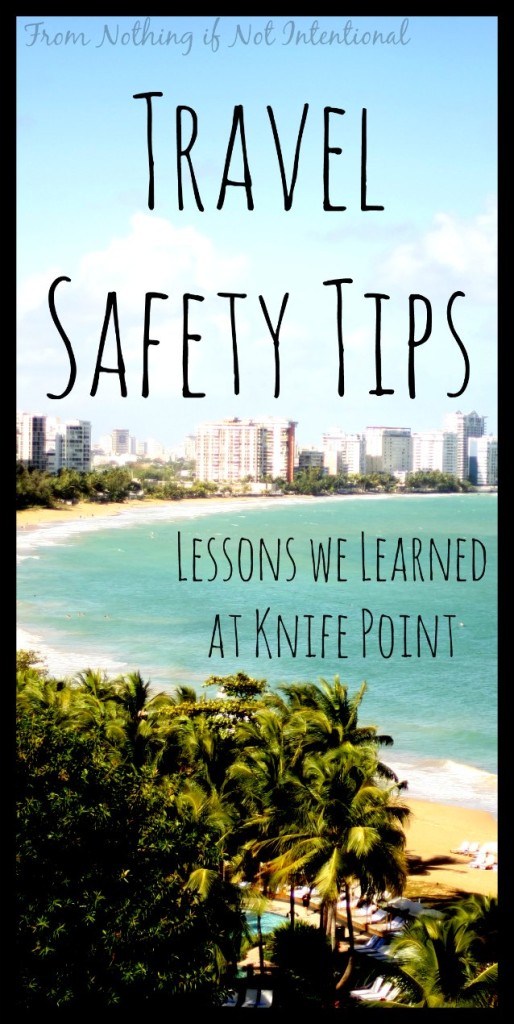