We’ve partnered with Yuba Bicycles for a series of posts all about biking with kids! Before we settled on the Yuba, I obsessively researched all of the ways we could haul, carry, or ride with our two young girls. In the end, we decided that the Yuba was the solution that would fit our girls the best and last our family the longest. Read on to learn about all of the options we considered and how we ended up with a Yuba. 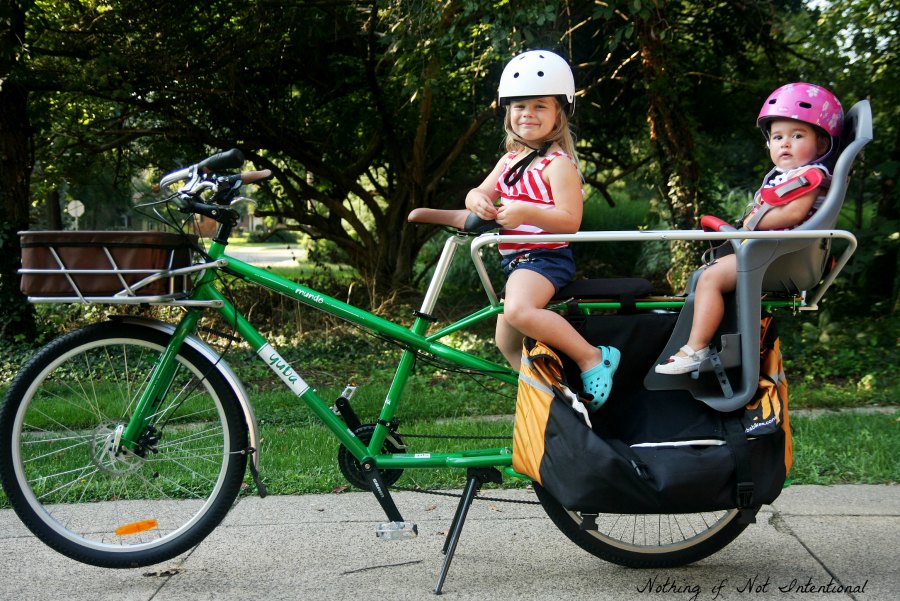 We’re not serious cyclists, but we do love to bike for fun and exercise. BK (before kids), we even went on an epic trip. We spent seven days riding across the upper part of New Zealand on broken pawn shop bikes. We slept on broken beds in run-down cabins, ate moldy bread, listened to a domestic disturbance through the paper-thin walls of a junky hotel, saw dolphins jumping in the ocean as we road along the road, got food poisoning, went sand boarding, and likely saw an angel. (If I told you that story in detail sometime, would you read it? I’m dying to tell that story!)

Then we came back to the states and periodically used our old mountain bikes to commute to college and out for date night. A few years later, baby #1 appeared on the scene. I rode (carefully) up until the week she was born.  And then our biking stopped. How do you ride a bike with kids?!

Affiliate links included for your convenience.

When a baby is born, the first choice of bike gear is usually a pull-behind bike trailer. 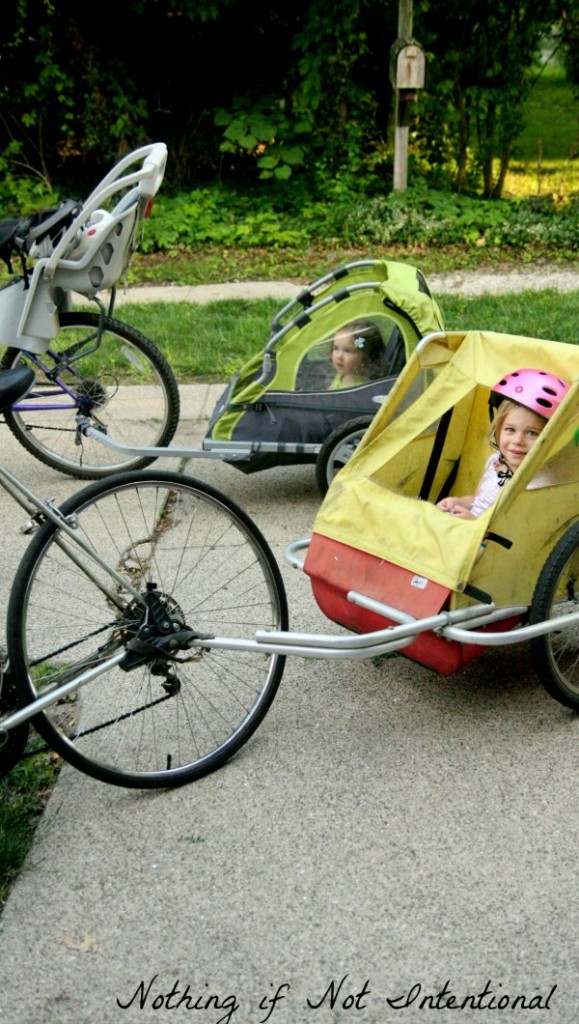 Advantages of a Bike Trailer

Bike trailers can hold one or two children. This is good if you have multiple little ones (like we do).

I believe manufacturers usually recommend waiting until twelve months to put a child in a bike trailer. Some people say that as soon as children can sit unassisted, they can ride in a trailer. However, there are many people who insist that a baby shouldn’t be on a bike before his or her first birthday.

Some people have found ways to secure an infant car seat inside a trailer in an attempt to allow babies to join on family rides from an earlier age. Obviously, this method isn’t tested for safety.

Bike trailers offer protection from the elements and a bit of comfort should your little one fancy a nap.

Bike trailers are typically very stable (they’re hard to tip) and give you a bit of storage space should you decide to pack a lunch or run a few errands.

Disadvantages of a Bike Trailer

With two kids in a trailer, you can really feel the extra weight. Honestly, this was a big selling point for me for the Yuba. Believe it or not, it is WAY easier to haul my girls on the cargo bike than to drag them around in a trailer attached to my old mountain bike.

And the cargo bike will be able to handle them as they grow. I honestly don’t notice much of a difference when I ride with or without them on the Yuba. Their weight doesn’t affect my ride much!

Bike trailers can’t help with sibling squabbles. The sibling squabbles ended up being a rather annoying issue for us. Our younger daughter (18 months at the time) thought it was hilarious to head-butt her three-year-old sister and yank out chunks of big sister’s hair while riding in a bike trailer.

Since bike trailers are so low to the ground, I felt nervous that they wouldn’t be seen by vehicle drivers. There are flags, lights, reflectors that can help with trailer visibility.

Another popular option is a rear-mounted bike seat. Bike seats are child-seats that attach to the back of your regular bike. They’ve been around for ages–my parents used one when I was a tot! 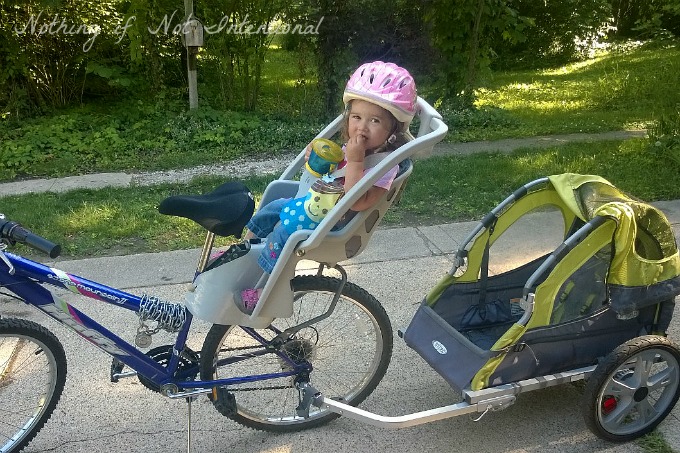 Advantages of a Rear-Mounted Bike Seat

Kids are nearer to you when they ride in bike seats. You don’t have the visibility issues that come with hauling a trailer.

They’re inexpensive. A used seat can sometimes be snagged for just a few dollars at yard sales and swaps.

It’s more fun for kids to be up high. As soon as my girls were old enough for the bike seat, it was the preferred spot for both of them. To prevent sibling fights (see above) we had one girl ride in the trailer and the other in the seat. The seat was the most coveted spot.

Disadvantages of a Rear-Mounted Bike Seat

Many people express concern over what would happen to a child in a wreck.

Most seats have a weight limit of 40 lbs. I had a really hard time trying to find one in my budget range for bigger toddlers or preschoolers. Thankfully, the Yuba toddler seat goes up to 48 lbs.

Advantages of a Front-Mounted Bike Seat

With front bicycle seats, you can see your children at all times. Also, people argue that they are safer than rear seats as the parent could help break the child’s fall in an accident.

In the U.S., one popular option is the iBert.

The WeeRide Kangaroo Child Bike Seat is another option. It goes between the parent and the handle bars. Some people prefer this option because it allows kids to hold on to the handlebars as they ride.

Also, there’s no denying that the view for the child is better from the front of the bike than from the rear.

For more info about front seats, check out this thorough review from Tot Cycle.

Disadvantages of a Front-Mounted Bike Seat

We seriously considered one for our family, but most don’t go past 40 lbs. My almost-four-year-old just hit 40 lbs a few months ago, so this could theoretically work for my two-year-old for a few more years. (Height is a factor for many kids as well. They may grow too tall before they are too heavy.)

One of my husband’s concerns (which was reflected in many of the reviews we read) was that he would hit the front-mounted seat with his knees when he rode.

Tag along bikes are popular with parents of slightly older kids. Once a child is capable of holding his or herself on a bike seat for an extended period of time, you can attach a “tag along” to the rear of an adult’s bike for the child.

Advantages of a Tag Along Bike

It’s hard work carrying kids on a bike! Tagalong bikes offer parents a bit of relief from the dead weight and help with the pedaling.

At some point, all kids outgrow their trailers and bike seats. For kids who aren’t ready to navigate their bikes solo on longer family rides, the tagalong option allows them to pedal and ride like the adults.

Parents take comfort in the fact that the child is still secure and safe as he or she rides.

Disadvantages of a Tag Along Bike

I’ve heard that there’s a lot of variance between the different trail-a-bike options. Some of the cheaper models are (supposedly) quite wobbly and unsteady. We looked at an option from Europe that would firmly attach a child’s bike to our bike, but it is currently only available in Europe. As such, it is quite expensive. If you’re interested, check out this thorough review from Cat Howell’s blog.

Also, even though our (almost) four-year-old is capable of riding her bike independently (and without training wheels!), she’s doesn’t have a lot of endurance. I worried that she would tire easily on the tag along bikes. And then what? How would she rest?

Nate and I absolutely love riding a tandem bike together. It’s so cheesy that it’s cute! When our daughter’s legs are long enough, I think she’ll join us on our tandem bike. 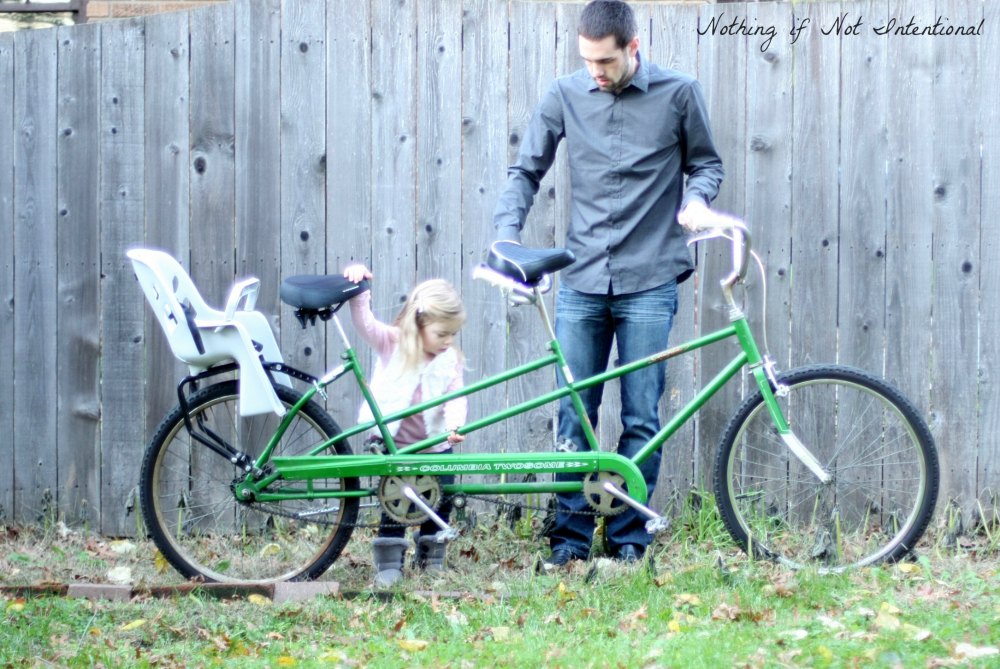 Advantages of a Tandem Bike

The parent can ride in front and do most of the work. The child doesn’t have to steer, but otherwise gets the complete bike experience.

Disadvantages of a Tandem Bike

It’ll be several years before our girls are big enough for our standard tandem bike.

If you don’t already have a tandem bike, they can be hard to track down.

Our tandem bikes have both been “vintage,” which means no derailleurs. It’s tough riding up bike hills without gears!

Before we got our Yuba, we tried or considered a million ways to combine the options mentioned above to work for our family with two young kids (currently two and almost four).

Here are our thoughts:

Bike seat plus trailer. We tried this for a while! It worked okay, but both girls wanted the bike seat. Also, this was a relatively short-term solution for us, since preschoolers are usually too big for seats and too heavy to pull in a trailer.

Tagalong plus a rear bike seat. This seemed ideal, but they don’t work together. You can’t attach a tagalong bike with a rear-mounted seat.

Front seat plus tagalong. This could have definitely worked for a few years! But what happens when I have a three and five-year-old? Would the five-year-old be able to keep up on our big rides when little sister booted her from the tagalong? Would I even want my preschooler to ride independently when we ride on busier streets? Would she have the endurance necessary for biking for transportation at such a young age?

About six months ago, I started seriously and objectively researching our long-term bike options. Our girls were outgrowing the double trailer, so we considered all of the options mentioned above. Once I decided on a cargo bike, I approached Yuba and suggested a blog-bike partnership. 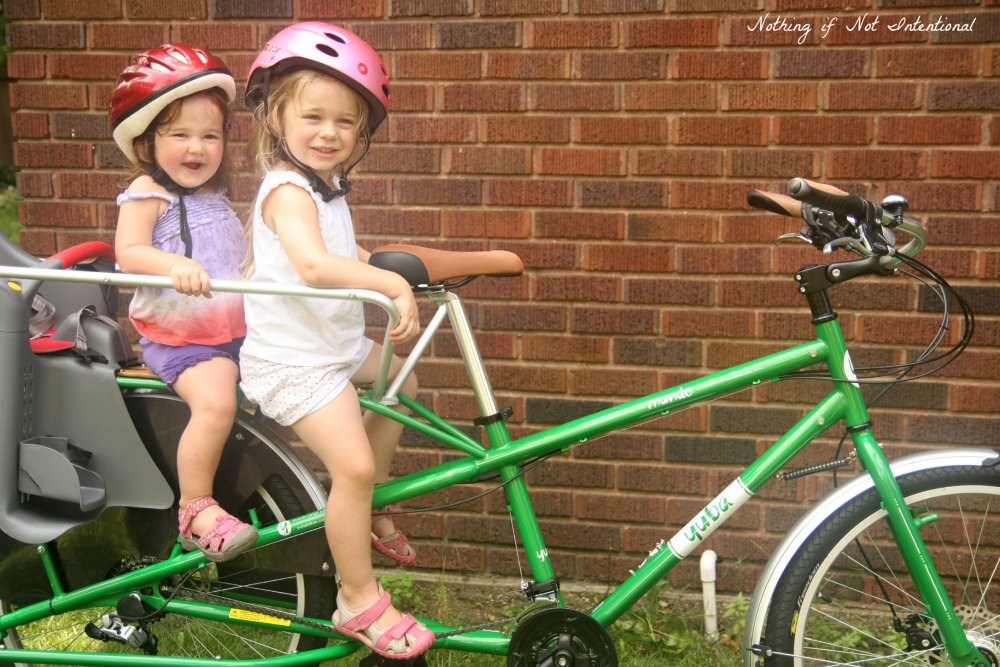 Bike safety sticklers will be glad to hear that our oldest daughter finally got a new helmet that fits much better than the one in this picture. You can read more about our bike safety strengths and weaknesses here.

Our Yuba Mundo is currently configured to hold two preschoolers (in the monkey bars) and a toddler (in the toddler seat). If you have two or more kids with little ones who are closely spaced, I can’t imagine a better biking option.

Also, since the Yuba Mundo is a cargo bike, I’m certain it will be put to good use long after my girls are riding on their own. Maybe we’ll use it to haul our cello.

Since both of our girls get to ride up high in the Yuba, they have a great view and are happy to ride for miles and miles and miles. Or, to be more specific, they’re happy for about seven miles each way. (When the little one is worn out, we distract her with these bike games.)

The Monkey Bars (for my almost four-year-old) and the Peanut Shell (for my two-year-old) give me peace of mind about their safety. The bike itself is incredibly sturdy. It takes a bit of practice to get used to maneuvering a larger-than-average bike, but I now am faster and more confident than I ever was when I hauled the girls in bike seats and trailers on my old mountain bike.

For us, the obvious choice was the Yuba. The icing on our cake is that Yuba agreed to partner with me and let me share my obsessively researched options with all of you!

Did I leave any options out? I’d hate to be less-than thorough. Should you have any questions about our personal experience with biking with kids, please email me!

Images used in the collage courtesy of Yuba and Amazon.com.